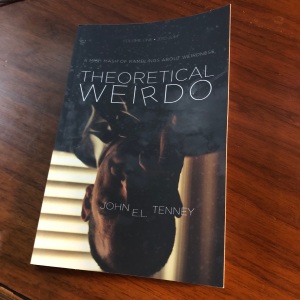 You may be familiar with John EL Tenney‘s work from a number of places, including the Internet, various paranormal television shows, including Hellier, or his lectures and presentations at in numerable venues over the past several decades. His new book, theoretical weirdo, is a collection of brief essays which present a cross-section of his thinking on a variety of paranormal topics over the past several years. According to the cover, the years are 2010 through 2019. Clocking in at around 120 pages, this is a book that you’ll breeze through, then go back and give a closer read to some of the chapters that caught your particular interest the first time around. For me, the chapter on “Five Reasons why Paranormal Research is Probably not Taken Seriously by the Scientific Community” was one that rewarded re-reading and intellectually engaging with a bit. “Haunted Hooey”—on techniques that may be used to fake phenomena was great as well.

My favorite chapters in the book were the “State of the Paranormal” entries for 2018 and 2019; I look forward to Tenney’s 2020 entry. Also, his thoughts on when and why conspiracy theorists should shut their mouths is very well-thought out and, along with the chapter “I am a Conspiracy Theorist” presents readers with a good exemplar of how to approach the subject in a serious, useful way.

The older I get, the more I enjoy collections of brief essays. I suspect I can put this down to my ever diminishing attention span but I also think that I really appreciate the craft that goes into saying what needs to be said about a topic, and then stopping. And then maybe editing that down to something even more concise and concentrated. I like books like the so much that I even wrote one once!

On Twitter, I joked that any book that discusses Father Malachi Martin is halfway to a full-endorsement. Well, after finishing it, I can say that I do, in fact, fully endorse and recommend the book. On top of everything else, Tenney includes a selection of posters for his lectures and good golly, those things are very well done, clever, and fun.
The cover says this is volume one so we can only hope that volume two will be in the works at some point. In the meantime, read this book.

Theoretical Weirdo may be purchased at Amazon.

Support The Saucer Life via PayPal

My Books on Amazon